Free US returns and exchanges 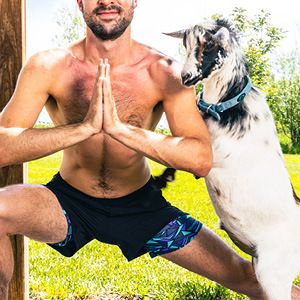 At 6'7" & 330 lbs, the recent Alabama transfer and national champion, Brown, is roughly 230 lbs bigger than most supermodels. Most people couldn't fathom a right tackle becoming a supermodel. But Brown isn't your average model. And Shinesty isn't your average underwear company.

"When you have a body this good, you deserve to be paid." Brown said. "As a college football player, I'm already used to millions of people seeing me in pants that leave nothing to the imagination. Might as well make some money while I'm at it."

Brown said partnering with Shinesty is really a dream come true. "Well, it wasn't really MY dream, but I'm sure someone dreamt of modeling underwear for a company, and now their dream has come true for me."

Shinesty signed Brown for an undisclosed amount of cash and called it "a big heapin' pile," but provided no further details.

Shinesty is home to Ball Hammock Pouch® Underwear, men's underwear that feature a proprietary supportive pouch to keep his balls safe and comfortable. They have sizing going up to 5XL.

Tommy will appear in Shinesty's new high fashion campaign recreating some of the industry's most iconic print and video advertisements to date. He described the campaign as a Calvin Klein ad but with a better looking dude wearing underwear that's actually comfortable. The campaign will be dispersed through digital and social media.